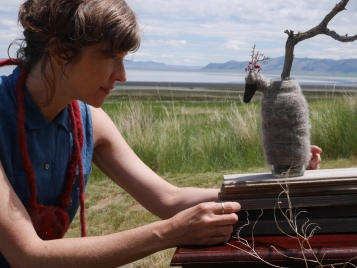 For over twenty years Temple has been making original performances that foster experimentation and collaboration. She is the co-founder of two theatre ensembles: Strangefruit in San Francisco and Woof Nova in New York and has worked as performer and designer with other artists including playwright/directors Richard Foreman, Mark Jackson, Sommer Ulrickson, Juanita Rockwell, and Tom Shade. She has been honored with Bay Area Critics Circle award nominations for best direction, sound, and costume design. Her work has been funded by the Zellerbach Family Fund and the SF CASH grant. Most recently she received a Baltimore Ruby grant for Come Shining, a performance developed in partnership with Springwell Senior Living Center, exploring the aging mind and spirit and the endurance of the imagination. Temple teaches in the Department of Theater at Towson University and UMBC and maintains a private Alexander Technique practice in Baltimore.